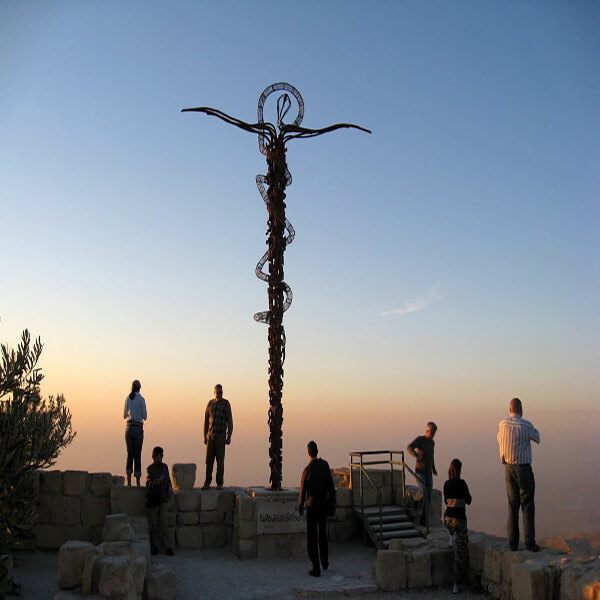 Mount Nebo Jordan is one of the most revered holy sites of Jordan, it is located 10 km (6 miles) west of the Roman Byzantine town of Madaba . Rising over 700m above the Jordan Valley, Mount Nebo offers spectacular views of the Holy Land as seen by prophet Moses , you can admire the dazzling view across the Jordan Valley and the Dead Sea, to the rooftops of Jerusalem and Bethlehem .Just inside the entrance to the left is the excavated Old Baptistery, which has one of the most interesting ancient mosaics in Jordan . The Old Baptistery mosaic is in remarkably pristine condition because another one was laid over it just a few decades later in 597. The underlying mosaic remained hidden for nearly 1,400 years until it was discovered in 1976 when the one on top was removed for restoration (it now hangs on a wall).
Visiting Mount Nebo in Jordan
Anyone visiting Mount Nebo Jordan today will see the exact same views prophet Moses saw when he was first shown the holy Land. Visitors will also be able to explore the old church ruins and see the six tombs which were discovered beneath the church’s floor.

Today, Mount Nebo is an active Franciscan monastery, the headquarters of the Franciscan Archaeological Institute, and a popular stop for pilgrims and tourists alike .